More than half of all people in this profession are employed directly by museums. Most of the remaining museums are owned by federal, state and local governments or colleges, universities and professional schools. The museum director and employees in these latter categories are paid by their government or educational overseers. Wages for those employed by museums averages $50,380 per year as of 2010 according to the bureau. Colleges and other educational institutions pay $57,510 per year on average. Government managed museums pay $53,340 on the state level and $50,240 on the local level, on average. Top pay is offered by federal government managed museums with pay averaging $79,440 per year.

The District of Columbia is home to several federally-managed museums, most notably those managed by the Smithsonian Museums. Pay rates are also higher in Washington, D.C., than they are in any state, with museum directors and other employees averaging $75,740 per year. California and New York offer the highest pay among states, averaging $62,400 and $61,840 per year respectively. The next highest paying state is Nevada at $60,320 followed by Maryland at $60,210 per year on average.

The future appears bright for museum directors, including curators, with the bureau estimating a 23 percent growth rate from 2008 to 2018. However, competition is expected to be keen as the number of qualified applicants continues to outnumber job opportunities. Those with highly specialized training, a master’s degree in their specialty, and experience should torshave an easier time finding work. According to the bureau, “In large museums, curators may advance through several levels of responsibility, eventually becoming the museum director.” Foreign language skills, strong business acumen, and the ability to work well with others are attributes that can help museum directors succeed. 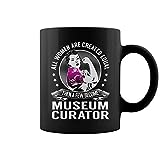 Meet Me at the Museum: A Novel
View on Amazon

Are You Prepared for a Career in Human Resources?

Working For Nothing: Are You Nuts?!

How to Plan a Career in Event Management

Considering Choosing a Career as an Electrician?